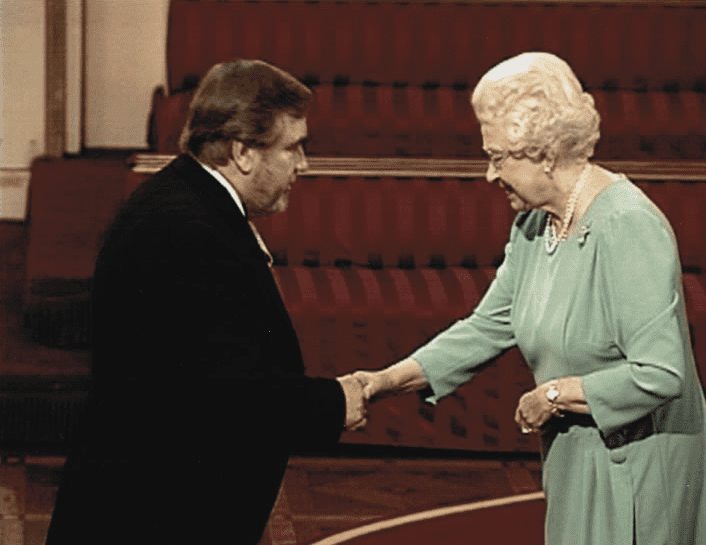 In her 70 year reign HM The Queen was the bearer of many, many honours to a variety of people awarded with a gong for their respective work in a particular field or for services given to charity.

In December 2006 our own Steve Smith was awarded an MBE by Her Majesty and the proud moment was captured as Steve shook hands with this great lady who was indeed one of his personal heroes.

Born shortly after World War II ended, Steve had, like many of us grown up knowing really only Her Majesty as Monarch. As Solicitor, High Court Advocate and public speaker, Steve was honoured to be at numerous official gatherings attended by members of the Royal Family. As a small boy he had watched Her Majesty's Coronation on a neighbour's television set, with his father, who had not long since left the Army in which he fought during the war, and both watched in respectful adulation the young Queen promise to an entire nation and the Commonwealth that she would dedicate her life to that role. A few years later Steve and his grandmother travelled miles by train and a bus a several miles walk to see the Queen pass by and wave to every single person gathered to see her.

Following Steve's sudden passing last year, this photograph which captured Steve's delight as Her Majesty awarded him with an MBE, hangs in our offices, aside which now is additional plaque on the wall which reads, "In Memory now of two of our heroes – Smithy, and HM The Queen".

Have you ever heard of forensic accounting? If not, it's a term to describe the process of using accounting skills […]

Employees who meet specific eligibility requirements have the right to make a Flexible Working Request.  Those employees then have the […]

An employer needs their employees to perform tasks to ensure the smooth running of the business.  However, the law does […]