HM The Queen – Happy Memories of a Queens Counsel 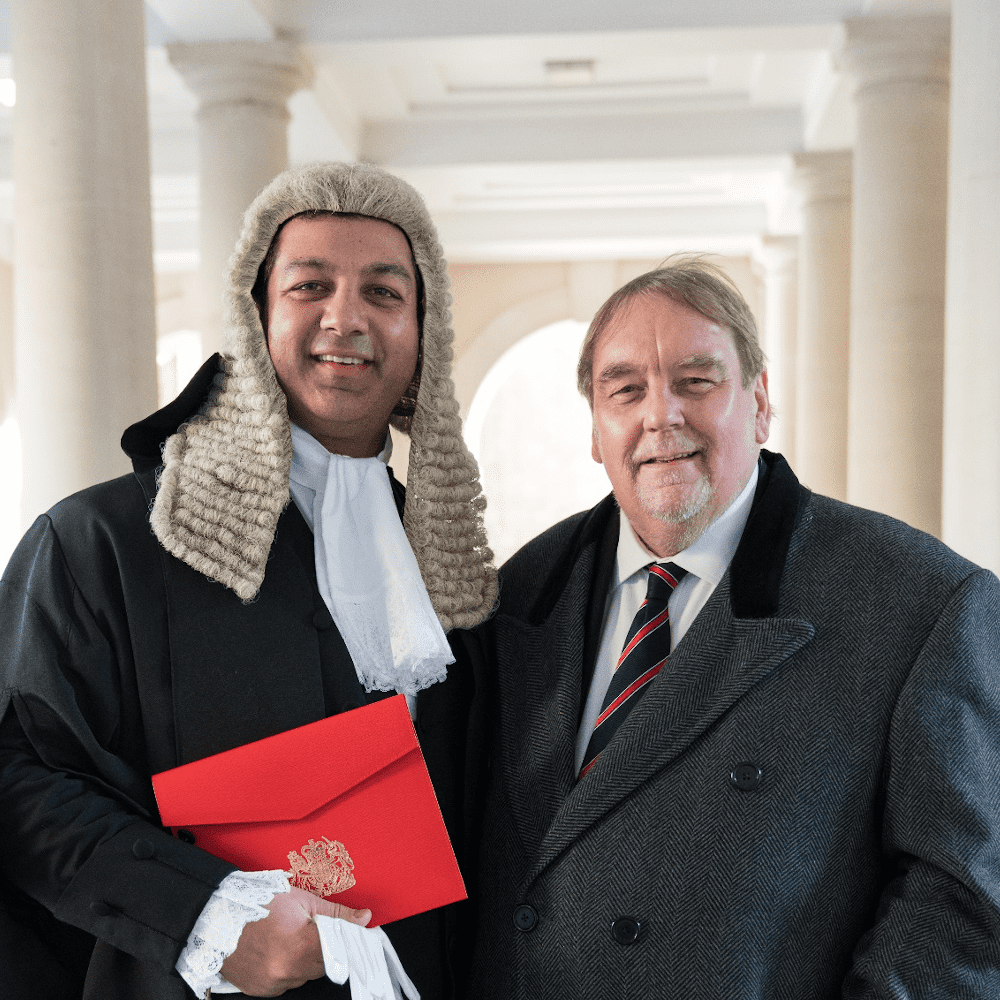 HM The Queen – Happy Memories of a Queens Counsel

The term Queen’s Counsel (QC) referred to a set of barristers and solicitors who the monarch appointed to be a part of Her Majesty’s Counsel learned in the law.

Those appointed as Queen’s Counsel attended a special inauguration and ceremony at Westminster where they must wear a special regalia and thereafter win the right to wear a special silk gown as notably then they shall have achieved precedence over other barristers in the courts. This is where the term "Silk" comes from.

Dapinder Singh – One of Wilford Smith's directors, took silk in 2017 and thus became Queens Counsel. This was an incredibly proud moment for Dapinder and for his father-in-law Steve "Smithy" Smith MBE, as the pair not only had a great personal relationship but had worked side by side for many years in the legal profession, Steve having given Dapinder his first ever brief at the start of his career as a junior barrister.

With the official "swearing-in ceremony" in February 2017 falling just weeks into Steve's chemotherapy treatment for a rare form of cancer, it was a fear that Steve might not be able to attend. But in typical Smithy fashion, nothing was holding him back, and indeed he proudly shared in joy as he watched his protégé receive the immense honour, and become part of Her Majesty's Counsel learned in the law.

The two pals had a fine day, with a number of funny twists. When "Leading Counsel" attends the special ceremony they must adorn a special regalia – an outfit which includes tights (yes – tights), a special silk jacket, and waistcoat and a long wig. This tradition goes back hundreds of years. Given that he had provided Dapinder with his first ever brief, Smithy also wanted to buy for him his first silk jacket. But for the long wig, this was a little more tricky. These special wigs are limited in number and it appeared Dapinder was struggling to source one. Then, a kind clerk of a London Barrister's Chambers and friend of Dapinder's made an offer that really brought something even more special to this special day. The Barrister and author John Mortimer of Rumpole of the Bailey fame, had his very own wig kept in safe storage. The kind clerk agreed that Dapinder could don this celebrity headgear and indeed he did so with great honour, not least as a fan of Leo McKern's beloved characterisation of the great Mortimer work, Horace Rumpole, but also as pal Steve had year before earned the media term "The Rumpole of Rotherham". This was a very proud moment for Dapinder, and for Steve.

Tributes to HM The Queen from across the world's courts

On receiving news of Her Majesty's death, the Grand Court in grand Cayman, where Dapinder presently defends a case, arranged a formal ceremony to mark the Queen's passing, where court officials gave moving tributes, there was a two minute silence, a 96-gun salute and wreaths laid at the gates of the court.

The honour of being Queen’s Counsel is not limited to the UK, however, but also extends to other British commonwealth countries.

Although currently referred to as Queen’s Counsel, the title will be referred to as King’s Counsel when a King reigns. For Dapinder, he will now be known as Kings Counsel and will serve that role very proudly under King Charles, but will always remember and honour having held the title QC, as awarded by Her Majesty.

In her 70 year reign HM The Queen was the bearer of many, many honours to a variety of people […]

As trusted employment law advisors to a wide range of small, medium, large, and multinational businesses, we can think of […]